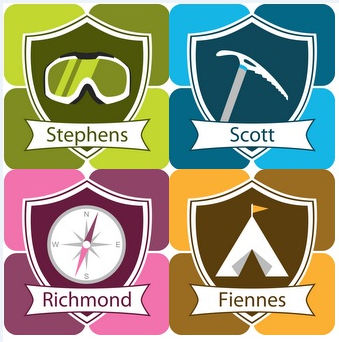 Why do we have a house system?

The four house names are Fiennes (orange), Richmond (pink), Stephens (green) and Scott (blue). All have successfully climbed Mount Everest.  All students receive a house badge in year 7 and are allocated depending on their tutor groups.

Each house has House Captains, Vice House Captains and a Head of House to help encourage participation and support students in all the competitions and activities.

Who are the houses named after?

In 2009, Sir Ranulph Fiennes became the oldest Briton to scale the world's highest mountain. The veteran adventurer reached the summit after two previous failed attempts. He had to turn back in 2005 after having a heart attack and through exhaustion in 2008. During his career he has led 30 expeditions. Ranulph is the only man alive ever to have travelled around the Earth's circumpolar surface (more people have been to the Moon!).  He also travelled to the North Pole unaided, completed a 97-day trek across Antarctica and ran seven marathons in seven days on seven continents.

In 2009, Amanda Richmond became the oldest British women to summit Everest. Amanda Richmond, 54, battled electrical storms, giant snow plumes and freezing temperatures to scale the 8,850m mountain, the highest on earth. Amanda was a PE teacher and raised money for the British Heart Foundation. Her target was £8,850, £1 for each metre of Everest.  She has visited our school twice to speak to the students about their experiences.

In 1993, Rebecca became the first British woman to have climbed Everest. She was a journalist who covered a story of an expedition to Everest and got bitten by the mountaineering bug.  Rebecca then went on to become the first English-speaking woman in the world to climb the Seven Summits; the highest mountain on each of the seven continents.

Is an English mountaineer noted for the first ascent of the south-west face of Mount Everest on 24th September, 1975. This also made him the first Britain to achieve this legendary climb. He has carried out 45 expeditions to the highest mountains across the world of which half were by new routes or climbed for the first time in alpine style.

How will I be rewarded?

Students are rewarded with a certificate for every 100 points that they reach.

Individual house point totals are accessed by the students on ClassCharts and overall totals are communicated through Monday Motivator each week.

Your browser is out-of-date!

Update your browser to view this website correctly. Update my browser now